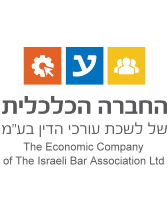 The Israel Bar Association was established in 1961 as an autonomous statutory entity in order to incorporate the lawyers in Israel and to assure the standard and integrity of the legal profession.

About the Israel Bar Association

The Israel Bar Association was established in 1961 as an autonomous statutory entity, under the Bar Association Law -1961, with the goal to incorporate the lawyers in Israel and to assure the standards and integrity of the legal profession. The Bar Association is a corporate body, and is subject to inspection by the State Comptroller. Membership is mandatory and is a pre-requisite to practicing law in Israel. As such, the ratio of lawyers to the general population in Israel is among the highest in the world.

The functions of the Israel Bar are stipulated by law and include:

A person is competent to be a lawyer in Israel if he attained a recognized academic degree in law, served the statutory legal internship period (presently one year) and passed the Bar examinations.

The Bar has the authority not to admit to its ranks anyone who has been convicted of an offense involving moral turpitude, or if certain facts are revealed while providing a basis to deem the candidate as an unfit lawyer. Such decision is also subject to scrutiny by the Supreme Court.

At the end of April 2002, the Central Committee approved a Pro-Bono program ("Schar Mitzvah") establishing a legal aid system to needy individuals who cannot afford to pay for legal services. The program's objective is to increase accessibility to the legal system, and to defend the rights of those who do not have the means to hire professional legal services. To this date, the number of volunteering advocates exceeds 2,000.

The Israel Bar also maintains an in-house professional lobbyist, who voices and promotes the opinions of the Bar to Knesset members.

Only a lawyer who is a member of the Israel Bar has the right to perform professional legal services, such as preparing documents of a legal nature for other persons, and providing legal consultation, as well as representing people before State authorities and in the courts (subject to reservations set forth in the Bar Association Law).

The Bar maintains a 'Profession-Defense Committee' (PDC) that examines complaints regarding acts by non-authorized legal or other professionals, or organizations encroaching upon the legal profession.

These benefits include reduced annual membership fees; assistance fund (insurance, pension etc.), consumer club, social activities and more. The Israel Bar has also created a Job Placement Office that operates within the framework of the Bar.

The Israel Bar and the Courts:

The Bar and the Supreme Court have a joint team that examines matters pertaining to Supreme Court proceedings. The Bar is involved in all the courts' activities, such as formulating civil procedure rules, planning the courts’ future computer system and planning new courts.

The Bar further plays a central role in the process of selecting judges and in strengthening the court's status.

The Israel Bar and the Society:

In addition to the Pro-Bono program mentioned above, the Israel Bar takes unambiguous stands on basic principles of law, such as protecting the Rule of Law - for example, by opposing to initiatives to limit the powers of the Supreme Court; as well as defending basic human rights – for example by operating Detention and Imprisonment Supervision Teams (DST and IST). The Bar also sustains projects to fight violence in society and in schools.

The Israel Bar maintains good relations with the largest international advocates' organizations, as well as with bar associations throughout the world, with some of which it has signed Friendship Agreements.

The peak of these meetings is the Annual Conference in Eilat, incorporating each spring fascinating professional sessions on a wide range of legal and social issues, ceremonial events, and a range of social activities. The Meeting has become an important forum for legal discourse in Israel.

The National Court of Discipline Secretariat

The International Association of Jewish Lawyers and Jurists Secretariat

The David Rotlevi National Mediation Institute of The Israel Bar

The Institute for Continuing Legal Studies

E-Mail: to be published soon